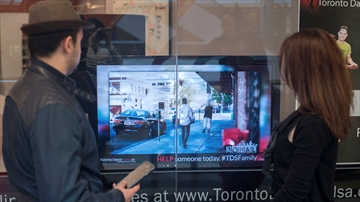 Passersby watch a video of random acts of kindness from outside Toronto Dance Salsa at Yonge Street and Empress Avenue.

Commuters on their cellphone or lost in thought whiz by, immersed in their own world.

Suddenly, they come to a halt outside Toronto Dance Salsa at Yonge Street and Empress Avenue, their focus shifted to the television screen behind the studio’s glass wall.

On the screen inside the shopping centre at the southeast corner of the intersection is a 20-minute loop showcasing random acts of kindness, from a man stopping his car to help an elderly lady cross a busy street, to a homeless man paying the meter so a stranger wouldn’t get a ticket, to a 20-year-old woman performing 20 random acts of kindness to celebrate her birthday.

Toronto Dance Salsa owner Evan Carmichael came up with the idea to play the videos as a way to brighten someone’s day and, perhaps, inspire them to perform their own good deeds.

“We want people to be friendlier, help out more, be inspired to do something good,” he said. “People have an emotional reaction when they walk by. We want to make their lives better, to brighten their day, even if they never take a class. People are too busy doing their thing, they are constantly in a hurry. I feel like we are a friendly city, we just don’t express it. We don’t talk to strangers or give a helping hand. It’s sad.”

The video, which is made up of recordings Carmichael found on YouTube, has been playing on the television screen for about one month, he said, adding while he has no plans to take it down, he might find new videos depicting the same message.

“I collected a bunch of YouTube videos that moved me,” he said. “I started crying. I wanted to call my mom and tell her I love her. I wanted to give back to a great community. I love this city and I want it to be a world leader. There is so much more to life than grinding out the nine-to-five lifestyle. We need to be reminded of that.”

As people stop to watch, many strike up conversations with Carmichael – while shedding a tear or two.

“It’s great seeing people walk by, stop, watch and cry,” he said. “People are stressed out, their on their phones, but we see them smile. (The video) makes you think, am I doing enough?”