Spanish Harlem Orchestra is one of Alfred's favorite bands 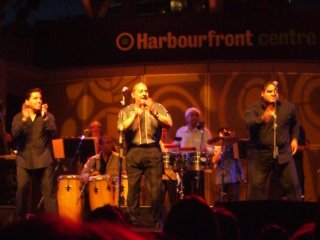 On June 6, as part of the Masters of World Music free concert series produced by Luminato and Harbourfront Centre, Spanish Harlem Orchestra performed for the first time in Toronto. Toronto salsa fanatics were given a delightful treat! A fun and signficant audience showed up for this event and the crowd was alive with the music.

Spanish Harlem Orchestra is one of Alfred’s favorite bands, and their performance did not dissapoint. They worked through numbers from their 2004 Grammy award-winning album Across 110th St., their 2002 Grammy nominated debut, Un Gran Día En El Barrio and of course course songs from their latest album, United We Swing. Their music is energetic, complex and fun, and their recognition is well deserved.

We saw many familiar faces from Toronto Dance Salsa, and we found that sitting beside us were some of Sharon’s students. Although we arrived early enough to get fantastic seats, it wasn’t before long that we were up on our feet swaying and dancing to the rhythm of the exhilirating latin beats. If you missed out, hopefully they were impressed by the great audience in Toronto and will come back soon. In the meantime, I managed to make a brief clip here for you to check out. If you’re unfamiliar with their music, don’t hesitate go out and get their CDs.

On June 6, as part of the Masters of World Music free concert series produced by Luminato and ... END_OF_DOCUMENT_TOKEN_TO_BE_REPLACED

On June 6, as part of the Masters of World Music free concert series produced by Luminato and ... END_OF_DOCUMENT_TOKEN_TO_BE_REPLACED