Although I’m a first-timer to a Salsa Congress, I felt this year’s Toronto Congress was very well organized. Alfred and I arrived at the Sheraton at 10:30am, on Saturday, thinking there would be chaos and hoards of people. But in fact, there were lots of signs, and quick, short lines that moved along smoothly. Workshops started on time but some of them went a little over their 1 hour time-slot. However, delays were never over 15 minutes. There was enough floor space for all the dancers in each workshop and plenty of water to keep us hydrated. According to Alfred, congresses in Europe tend to be a little more chaotic in comparison.

Next up, we went to “Rhythm & Body Movement” with Burju from Boston. She taught us how to shift our weight and transfer movement from one part of the body to another using body isolation and control. We then applied this to a 3 part Afro-Cuban routine. She broke it down and had us repeat each routine before putting it all together. By the end of the workshop, people from any level should be able to execute the basic steps and movements. And its a good exercise you can duplicate at home to practice your rhythm and body moves.

The third workshop we attended was Bomba y Plena (Afro-Puerto Rican Movement), taught by Young Blood from Puerto Rico. You knew they were authentic cause the class was taught in Spanish by one guy and translated into English by another. They split us up into two groups. Men on one side, women on the other. We learned three variations of a folkloric dance from Puerto Rico and had to imagine ourselves in the traditional attire of their people. Women were to imagine themselves in a long white dress and head wrap, men in traditional shirt and pants. Men and women would take turns dancing their respective parts throughout the dance. In the end, it was a battle of the sexes to see which group could out-dance the other. All in all, the the instructors were enthusiastic and I think everyone had a lot of fun. 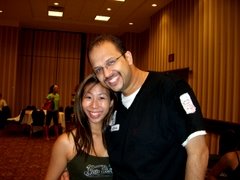 Of course, a Salsa Congress isn’t a Salsa Congress without Super Mario. So of course, we HAD to take Super Mario’s Partnerwork on 1. For those of you who don’t know, Super Mario is the “Million Moves Man.” This guy has so many moves, you never dance the same turn pattern with him twice. His combinations are often complex and surprising at every turn (literally). Alfred and I took his intermediate workshop and managed to learn the entire combination without too many problems. But we could see how many of the couples were struggling with it. For an intermediate class, the level of difficulty is pretty high. His classes are challenging to say the least, but thats precisely why they call him back year after year.

For the last timeslot, Alfred and I split up to take “Footwork Challenge on 1” for him, and “Ladies’ Styling on 1” for me.

For the Ladies: This workshop was useful for adding style and personality to your dancing. We learned a series of shines and a few cross-body lead variations that you can use to spice up your dance repertoire.

For the Men: Mark Anthony led the men through a very usable set of shines into a decently challenging footwork pattern. The steps took a bit of body isolation and quick footwork, but looked great and Alfred was keen to take it to the dancefloor.

After the workshops, Alfred and I headed back home for some much needed rest before going to the performances. We returned to the Sheraton around 8:30pm to await the 9:30 show. By then, most of the seats had already been taken. Sharon had warned us we would need to be there between 8-8:30pm to ensure seating. But we still managed to find some vacant seats at the back beside the aisle. The performers of Saturday night’s show include:

Al Liquid Silver & Karla Espinoza – This pair met with misfortune at the airport and their luggage was lost on the way from LA to Toronto, leaving them with no music and no costumes. But they were still able to pull off a last minute choreography with lightning fast spins that wowed the audience and drew their sympathy. What professionals!

Saltimambo – A Montreal-based group that performed an amazing salsa routine in purple and black. There were a lot of proud Montreal-ers in the audience to cheer them on but they didn’t need it as it was a fantastic piece of choreography that was both techinically sound and artistic. By the end, everyone was on their feet applauding.

City Dance Corps – This Toronto dance group gave an outstanding performance to the “King of Pop” in classic Michael Jackson attire. There was more Michael Jackson than salsa but it garnered a standing ovation nonetheless.

Dave Paris & Zoe Klein – This cirque-de-soleil-esque performance definitely showed off Dave and Zoe’s specialty in acrobatics and lifts. Some of the feats they did were just amazing and demonstrated their mastery of balance and performance art.

Oliver & Luda – Saving the best for last, these two are the undisputed World Salsa Champions of 2006. And its not hard to see why when you see them perform. Their movements are fast and highly accurate, with crowd-stopping lifts, tricks, and spins. One feat that stood out involved Oliver spinning Luda super fast while leading her around his body, switching hands halfway, and completing the 360 turn. It may not sound all that impressive, but that slight of hand was flawless and it takes a great degree of skill to be able to pull off that performance. To us, they were the crowning show of the night, hands down.

We had been up late Friday night and woke up pretty early Saturday morning so by the time we got to the social dance, both of us were pretty tired.

***Note to self: Get plenty of sleep the night before the Congress weekend so you can stay up and party till dawn next time…

Nevertheless, we danced and mingled until about 1am before heading home. There was a good mix of music with different selections salsa, cha-cha, bachata, and merengue. Alfred, you fill in the rest, I’m going to sleep…zzz…

Well, the live band was fantastic and at one point Jennifer was up on stage dancing with the Puerto Ricans from “Young Blood” and Ismael was up there too with a partner. We had a great time for one day at the Congress, but we were wiped by the end of it. Next year we’ll know to get plenty of rest the week before, and hey maybe we’ll go for the entire weekend.

Although I’m a first-timer to a Salsa Congress, I felt this year’s Toronto Congress was very well organized. ... END_OF_DOCUMENT_TOKEN_TO_BE_REPLACED

Although I’m a first-timer to a Salsa Congress, I felt this year’s Toronto Congress was very well organized. ... END_OF_DOCUMENT_TOKEN_TO_BE_REPLACED