Artist Review – The Jazzmen of Salsa

Who are the Jazzmen of Salsa?

Nina and Alfred had made a good start into this blog, but have been swamped by a few non-salsa priorities. We’re ramping up for some well needed vacation time, but won’t leave our readers hanging until our return. We’re headed for Asia, and being the salsa addicts we are, we hope to report on the salsa world all the way out from the Far East but until then, we’ll be posting a few reviews of salsa music artists and hopefully another club review. 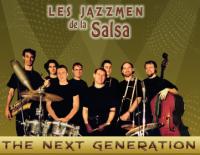 Who are the Jazzmen of Salsa? We’d never heard of them, and Sharon lent us some of their material to check them out. When we first saw the cover, our initial thoughts were less than promising. A bunch of jazz musicians from Montreal playing some sort of jazz fusion salsa? Even a lesser skeptic would have had their suspicions. Happily for our ears, this group delivers more than a lukewarm blasphemy of salsa. Their energy and creativity is very listenable and for the most part danceable. For those unfamiliar thes terms, there can be salsa music that can be nice to listen to, but difficult to dance to and sometimes vice versa. It is best of course for the artist when their music is both nice to listen to and fun to dance to.

As their name implies, the group attempts to add jazz elements into an underlying salsa beat and style. They do this without being repetitive, and are able to change things to keep things from becoming tedious. The song titled Hip Salsa Hop has a typical salsa keyboard pattern at first but unexpectedly breaks into a jazzy styled break. The tune definitely makes one want to hop, especially to the tight horns and saxophone playing off one another. Hip hop it is not, but the smooth blues style of this song definitely makes one wish it wouldn’t stop.

As for the song labeled Cowboy’s Salsa, the humor of such a combination really shows itself in this tune. It is fun and demonstrates the composer’s creativity and the musician’s ability to adjust to the fusion of styles. The clave in combination to the music makes one wonder if a whinnying horse will crash through with a cowboy at any point. There is a video on the group’s website that shows a couple named Eve and Thomasz dancing to this song in costume, and are a fun complement to this song.

Salsa’s Boogie sounds like somebody convinced a Dixieland jazz band to play salsa. At times it is hard to pick out the salsa in this song, but the the clave is there and it is difficult to fault someone for trying something new and fresh.

So in general, this group does well to bring something new to the salsa world. More for those with an open mind than a purist, the manage to bring a bit of both genres without ruining either. Not an easy task, and that in itself deserves an applause. This band looks like a fun group to see live, so hopefully they swing by Toronto someday.

You can visit The Jazzmen of Salsa at their website: http://www.thejazzmenofsalsa.com/

Nina and Alfred had made a good start into this blog, but have been swamped by a few ... END_OF_DOCUMENT_TOKEN_TO_BE_REPLACED

Nina and Alfred had made a good start into this blog, but have been swamped by a few ... END_OF_DOCUMENT_TOKEN_TO_BE_REPLACED