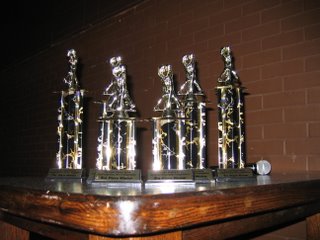 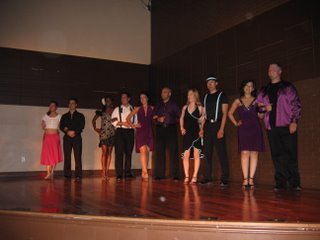 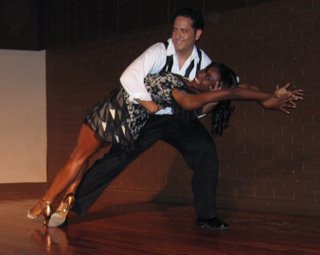 Well, what did you all think? Friday saw the end of the 2008 TDS amateur competition…and what a show it was. 5 couples, all of them outstanding. In case you missed it, the winning performance was given by Kelly Elliott and Barry Ip. They put on a show worthy of the top prize. I wish to congratulate all of the competitors, the creativity, skill and joy on stage was visible from everyone.
The top 3 were as follows:
1. Kelly Elliott & Barry Ip
2. Camela Adams & Manuel Alvarez
3. Therese Maceda & James Kalfin
Also deserving of recognition are Marsha Soefreddie & John Radtke and Jennifer Botelho & Tyrone Sterling, who all showed why they deserved to be in the top 5.

Of course, none of what the performers did on stage would have been possible without those people behind the scenes. With that in mind, I’d like to thank Sharon and Evan for all the work they put into the event; George for being one hell of an MC and all the others who helped organize.

It seems hard to believe that this journey began 3 months ago and is now done. I remember looking for a partner back towards the end of March and having Sharon suggest someone who I knew nothing about. However, I figured, let’s do it. I am so thankful that that partner turned out to be Camela Adams. We clicked instantly as a dancing duo. From our first informal meeting all through the rehearsals and choreography, our compatibility was obvious and strengthened. It was a blast putting together our final routine with her.

Our routine began as I was researching music for this blog and came across a cd of old tango standards made into salsa by Jerry Rivera. Two songs specifically caught my attention for having a stronger tango feel. Of the two, one was my preferred choice, luckily, upon presenting Camela with 4 song options, she picked the one that I had in mind. Having decided on a song, it was time to choreograph. Taking into account that it was based on a tango and that the song (Yira Yira!) dealt with overcoming despite the world being cruel and unfair, I decided that we should make it a passionate, “us vs. the world” type of performance. In a couple of days I had carefully timed movement to music, working in moves that fit with the song. When it came time for our first practice, Camela gave her input and slowly but surely, the final piece took shape.

From the very beginning, we both had a very exact idea in mind for costumes. All in all, the final piece was one we were both proud of and which we felt did a good job of combining tango and salsa elements into one fun package. I think what surprised me most was the expression we both put into the final performance; at no point during practice had it ever come out the way it came out on the stage. Camela had always been very good on the stage, it was about time I kept up. Right before the performance, Camela told me she would be adding a special touch to the routine. In a strange way, this brought out a certain side of me that played off extremely well with her stage presence. The way it all came together was great, a justification of the work we had put into it. I’ve never been more expressive on stage than I was on that night.

And now it is done. No more 3 hours of practice a week, which oddly enough I kind of miss. It was quite an experience and it won’t be soon forgotten. The difference within me this year from last was stark and obvious. I can say with certainty that I have grown as a dancer and encourage everyone to cast their fear or apprehensions away and do it…it might surprise you how much you gain from it. In closing, a giant note of recognition to everyone involved, you’ve made this year’s competition memorable for many reasons….can’t wait to see next year’s version.

Well, what did you all think? Friday saw the end of the 2008 TDS amateur competition…and what a ... END_OF_DOCUMENT_TOKEN_TO_BE_REPLACED

Well, what did you all think? Friday saw the end of the 2008 TDS amateur competition…and what a ... END_OF_DOCUMENT_TOKEN_TO_BE_REPLACED